The simplest way to identify Russian sympathizers is to probe them on the matter of military interventionism. They may appear principled in their suspicion toward American force projection but are nowhere near as apprehensive about Russian muscle-flexing—even in the same theater of operations. That describes the foreign policy views of Hawaii Congresswoman and favorite of the Bernie Sanders wing of the Democratic Party, Tulsi Gabbard. Following an ill-conceived visit to the Syrian capital to meet with the blood-soaked dictator Bashar al-Assad this week, her craven prostration before Russia’s vassals may have gone too far. Even Gabbard’s erstwhile allies are abandoning her.

Gabbard’s support for Russian objectives in Syria has always been conspicuous. Take, for example, her December appearance on CNN to defend Donald Trump’s vision of an “America First” foreign policy. She made it clear her antipathy toward interventionism was wholesale. Not only did she oppose American combat operations in Syria and Iraq targeting ISIS but “essentially” in Afghanistan, too. Gabbard emphatically added that the United States was funding terrorism and that “every single” rebel group fighting to overthrow the government in Syria was in league with al-Qaeda. This is the Russian line, and Gabbard’s appearance received some warm praise and attention from pro-Kremlin media outlets.

Gabbard has even said she opposes the notion of imposing a “no-fly zone” over Syria–through which Assad’s forces would be prevented from dropping barrel bombs or chemical munitions on civilians—because it would “strengthen ISIS and al-Qaeda” and could “result in a nuclear war” with Russia. She seems to have almost no problem, however, with Moscow’s military activity in Syria—even if that activity targets and destroys American assets.

“Bad enough U.S. has not been bombing al-Qaeda/al-Nusra in Syria,” the congresswoman tweeted. “But it’s mind-boggling that we protest Russia’s bombing of these terrorists.” Her feting of the land-hungry Russian autocrat didn’t end there: “Al-Qaeda attacked us on 9/11 and must be defeated. Obama won’t bomb them in Syria. Putin did.” Curiously, Gabbard has had little to say about the hundreds of thousands of Syrians whom Assad and Putin bombed and starved.

It seems that neither Democrats nor grassroots liberals have much stomach left for Gabbard’s useful idiocy. “There’s a pretty unanimous feeling of shock and disgust,” an unnamed Democratic staffer told The Hill. “I think people are just stunned.” House Minority Leader Nancy Pelosi washed her hands of the affair, saying that she had “no knowledge” of Gabbard’s trip beforehand. “He’s a war criminal and a murderer, he has supported and benefited from terrorism, he has close ties to Russia, and he cannot have a role in Syria’s future,” read a statement from New York Democratic Representative Eliot Engel. Over at the liberal blog Daily Kos, Gabbard is being castigated for echoing “Assad/Putin” propaganda, and there are even calls for someone to mount a primary challenge against her in 2018.

Republicans have been even more vocal in their frustration with Gabbard, but the silence from the White House has been deafening. The condemnations of Gabbard issued by Republicans like Senator John McCain and Representative Adam Kinzinger hardly requires the mustering of much internal fortitude. After all, as McCain said, Gabbard’s appearance with Assad “kind of legitimizes a guy who butchered 400,000 of his own people.”

At this juncture, it must be noted that President Donald Trump’s chief strategist, Senior Counselor Steve Bannon, is on the same page with Gabbard when it comes to foreign affairs. He even arranged a meeting between Trump and the Hawaii congresswoman during the transition period. Bannon reportedly favored Gabbard to serve as America’s ambassador to the United Nations. “I felt it important to take the opportunity to meet with the President-elect now before the drumbeats of war that neocons have been beating drag us into an escalation of the war to overthrow the Syrian government,” Gabbard said, employing a style of prose that would be familiar to any regular reader of the Kremlin-funded news network RT.

Gabbard’s trip comes at a time in which the Bannon-Breitbart view of geopolitics may have lost the argument inside the West Wing. On Wednesday, the president asked the Pentagon and State Department to draw up plans within 90 days to create “safe zones” inside Syria for the processing and retention of refugees. That’s no small mission; former Secretary of State John Kerry testified last year that it would take up to 30,000 U.S. troops to secure and hold territory in Northern Syria constituting a “safe zone.” Moscow appeared surprised by the move. “No, our American partners did not consult with us,” said Kremlin spokesman Dmitry Peskov, who warned that Russia would not support a plan that worsened the refugee crisis.

The questions surrounding Gabbard’s propagandistic sojourn to the lair of a genocidal dictator deserves more attention than it has received. There are those within the so-called realist community on both ends of the political spectrum who would like to paper over Putin and Assad’s brutality and absolve the United States of its moral and strategic obligations. Gabbard probably thought she could advance that objective. Her actions seem to have had the opposite effect. 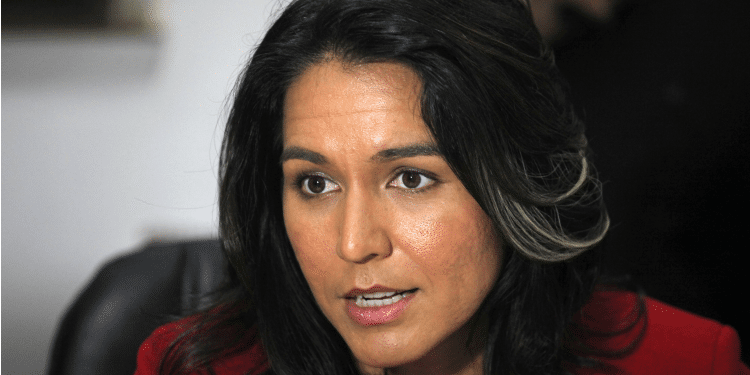