The moderates are routed! Ahead of the 2018 midterms, those squishy Republicans who inspired Donald Trump and his mutineers to take control of the GOP are calling it quits. This exodus is taking place against the backdrop of a new conservative insurgency led by the likes of Steve Bannon, who is set on remaking the GOP in Trump’s image. The movement he wants to catalyze is not, however, all that conservative. And in actual fact, the Republicans he’s working to oust really aren’t moderates. Upon examination, a great number of our political definitions are outmoded and serve less as descriptors and more as security blankets.

Among the soon-to-be retired Republicans are Florida Rep. Ileana Ros-Lehtinen, Michigan Rep. Dave Trott, Pennsylvania Rep. Charlie Dent, and Washington Rep. Dave Reichert. Each represents a light red or purple district. Dent co-chairs the Tuesday Group, which is as close to a Republican Moderates’ caucus as it gets in the House. And yet, these Republicans are far from the heretics their conservative critics make them out to be.

Ros-Lehtinen, for example, hails from a district with a Cook Partisan Voting index that leans four points in the direction of Democrats. In 2016, Hillary Clinton carried her district by 20 points. And yet, she maintains an American Conservative Union “lifetime rating” of just under 70 percent. Barring a miracle, Ros-Lehtinen will be replaced with a Democrat. Similarly, Trott enjoys a 77 percent lifetime ACU rating, and holding his suburban Detroit district will be a difficult task for a non-incumbent in a tough GOP year. The same could be said for Reichart and Dent, who hail from swing districts. Last week, following Dent’s decision to retire, his strongest primary opponent declared victory.

“We wanted to make sure we got a more conservative candidate in the seat, and now we can do that,” said Pennsylvania state Rep. Justin Simmons. The four-term state-level lawmaker has campaigned against the incumbent primarily for failing to meet conservative litmus tests but also demonstrating insufficient fealty to President Donald Trump. If Steve Bannon and the deep-pocketed donor Bob Mercer have their way, there will be an entire slate of Trumpian primary candidates eager to replace Trump-skeptical GOP representatives on Capitol Hill.

According to Politico, Bannon is preparing to mount an “all-out war” against Mitch McConnell and his Republican Senate majority. He is lining up donors and meeting with candidates who could pose a threat to incumbents like Tennessee’s Bob Corker, Mississippi’s Roger Wicker, Nevada’s Dean Heller, and Arizona’s Jeff Flake. Like their counterparts in the House who are hitting the bricks after 2018, the offense of which these Republicans are guilty is their perceived lack of loyalty to Trump.

“Bannon,” the Miami Herald reported, “was enormously influential in pushing a nationalist agenda in the White House that made more centrist Republicans deeply uncomfortable.” In this construction, Bannon is the ideologue, and his Republican foils run right down the middle of the road. This is lazy shorthand that avoids a thorough accounting of what Steve Bannon and the Trumpian party he wants to build actually believe.

Steve Bannon’s “conservatism” is not the sort that most Republicans of the last two decades would recognize. He is devoted to trade protectionism, which is traditionally a cause dear to organized labor. Why else did he reach out to a pro-labor liberal journalist in the effort to undermine Trump’s rapprochement with China? Despite this unceasing effort to make enemies in Beijing, Bannon is eager to make friends in Moscow. He told “60 Minutes” that upgrading America’s increasingly decrepit nuclear stockpile was a needlessly provocative act and a waste of funds that could be better spent refurbishing America’s urban centers. In fact, he reserved the most venom in a relatively venomous interview for Republican policy practitioners like Condoleezza Rice, Brent Scowcroft, and Dick Cheney.

In 2014, Bannon marveled at the fact that “not one criminal charge has ever been brought to any bank executive associated with the 2008 crisis.” In that address, he expressed distrust toward “the Ayn Rand or the Objectivist School of libertarian capitalism. “It is a capitalism that really looks to make people commodities, and to objectify people, and to use them almost — as [with] many of the precepts of Marx — and that is a form of capitalism, particularly to a younger generation [that] they’re really finding quite attractive,” he said. His skepticism of the value of austerity is evident in his policy recommendations, too. Bannon was among the more senior-level voices close to the president advocating that the U.S. borrow to fund a massive $1 trillion infrastructure project—an objective lifted from socialist Sen. Bernie Sanders’s wish list.

There’s nothing “conservative” about this, but it would be a mistake to suggest that Bannon must then be liberal. He speaks with utter contempt for the warmed-over socialism embraced by the modern secular left. His opposition toward even a modestly reasonable compromise on the issue of illegal immigration is intractable. The anti-establishmentarianism informs his hostility toward “the progressive left” and the “institutional Republican Party.” The party Bannon wants to transform the GOP into is one that emulates, insofar as it is possible, the mercurial style of the president. If that’s the Republican Party of the future, it will be one that undercuts conservatives in Congress to cut “deals” with Democratic leadership toward no greater end than positive press coverage and pushing hard choices off until another day.

Among effete circles were centrism is fetishized, there is a perception that the middle way is the noblest of ways. It takes the most unobjectionable policy prescriptions from each of the two parties and discards the prejudices on their extreme fringes. Only the demands of tribalism, this hackneyed church of centrism insists, compels ideologues to tolerate the eccentrics and fanatics in their midst. As Steve Bannon, Donald Trump, and the party they are trying to build demonstrate, however, this definition of centrism is native to the elite.

In the real world, ideology gets an undeservedly bad rap. In reality, pragmatists are bound only to that which balances expediency and popularity—and popularity isn’t always synonymous with good government.

The gauzy ideal of the bold politician sloughing off the chains of ideology and governing like a pragmatist unbound to any tribe has sunk its hooks into many a besotted pundit. But “third-way” centrism doesn’t look like No Labels. It looks like Donald Trump and Steve Bannon. 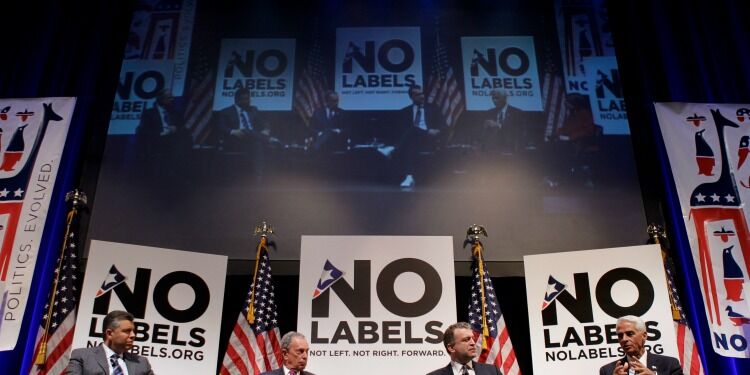