The only morally acceptable response to the events in Charlottesville is full-throated condemnation. Full stop. This is not the time for moral equivalencies. The barbarism committed by a white supremacist in the name of white supremacy should not elicit sympathy or a deeper exploration of root causes. The root cause of this weekend’s murderous violence is racism. The end.

When addressing the events in Virginia on Saturday, the president declined to condemn and isolate the fringe racist extremists within his supporters’ ranks. Those elements heard his silence loud and clear, as did his more responsible partners—including Kenneth Frazier, the CEO of Merck who resigned from Trump’s advisory council on American manufacturing in protest. The president tried to correct for the oversight on Monday, but the damage was done. Presidents don’t get mulligans.

Yet it is because Trump passed on such an easy opportunity to make examples of subjects so obviously worthy of condemnation that all Americans should engage in some introspection. We posture self-righteously at our moral peril.

The condemnations of Trump and the alt-right proliferate on Facebook and Twitter, in part, because it’s easy. Charlottesville is not complicated. There is nothing morally ambiguous about the actors on that stage. Anachronistic fascists bearing the symbols of racial hatred and genocide are a familiar adversary. It is a dangerous adversary, to be sure, but also one that lost the struggle for hearts and minds generations ago. Charlottesville may provide observers with a rare moral binary, but it may also be the culmination of our refusal to tackle more abstruse conflicts over the last 18 months.

The vehicular attack on peaceful demonstrators this weekend was preceded hours earlier by a violent melee in the streets between white supremacists and counter-demonstrators. This wasn’t the first time in recent history that two demonstrators flying, respectively, the symbols of Nazism and Bolshevism have clashed in American streets. It’s just the first time we as a country stood up and took notice.

In June of last year, a group of neo-Nazis emboldened by Donald Trump’s casual winking in the direction of their movement took to Sacramento’s streets armed with permits allowing them to demonstrate. They were met by a group of counter-protesters and a street battle ensued. “By Any Means Necessary,” a counter-protest group organized by individuals who formed the nucleus of what would become “Antifa,” engaged in a blood-curdling combat with white supremacists. Ten people were injured, some critically, as both groups attacked one another with bats, knives, and other improvised implements. It was not, however, the neo-Nazis who inaugurated violence outside the California state capitol.

“If I had to say who started it and who didn’t, I’d say the permitted group didn’t start it,” said protective services division head and California Highway Patrol officer George Granada. “They came onto the grounds and were met almost instantly with a group of protesters there not to talk.” Authorities alleged that the “Antifa” organizers had prepared for weeks to meet the white supremacist rally with the express intention of shutting it down. One year later, former middle school teacher and “Antifa” organizer Yvette Felarca was arrested and charged with assault and inciting a riot in connection with her role in that event.

Considering the heat of a presidential election year and the relevance of this attack, coverage of this event was muted. Even at the time, this nightmare obviously portended more violence, but few Americans seemed to want to explore its relevance. Perhaps the spectacle was representative of a breakdown of the American social compact too terrible to contemplate. Perhaps it was too evocative of Weimar to contemplate. Maybe the moral complexities of the situation and the ambiguity of the heroes and villains involved rendered the story impossible to relate in a simple soundbite. Whatever the case, we didn’t reckon with what it meant.

There have been other, briefer and less violent confrontations between alt-right agitators and “Antifa,” to say nothing of the confrontations between both organizations and law enforcement, but none of them seared themselves into the national consciousness like the events in Virginia.  All the while, a culture of romanticized political violence was taking root in the psyches of America’s political activists.

For a year, the left has muddled through an intramural debate over whether it was noble to physically assault white supremacists (like the kind that was meted out against Richard Spencer earlier this year). For its part, the alt-right has evinced violence. “A man wielding a sword hunted and killed a black man in New York City,” National Review’s David French noted. “A member of an ‘alt-Reich Nation’ Facebook group killed another black man in Maryland. A man opened fire on two immigrants at a bar in Kansas, killing one. A white supremacist in Portland murdered two men on a train who intervened when he harassed a Muslim and her black friend.” In 2016, the violence committed by Trump supporters at his explicit behest was well covered, but the organized campaign of counter-violence—a campaign that long outlasted the president’s incitement—was not.

Donald Trump is a coward. He has repeatedly refused to cast out the most undeserving elements of his coalition, but his cowardice is not unique. America has slouched silently toward this moment of crisis, ignoring all the glaring warning signs along the way. Amid our cowardice, we are sleepwalking back into a terrible past. Absent steely conviction on all our parts, the worst is yet to come. 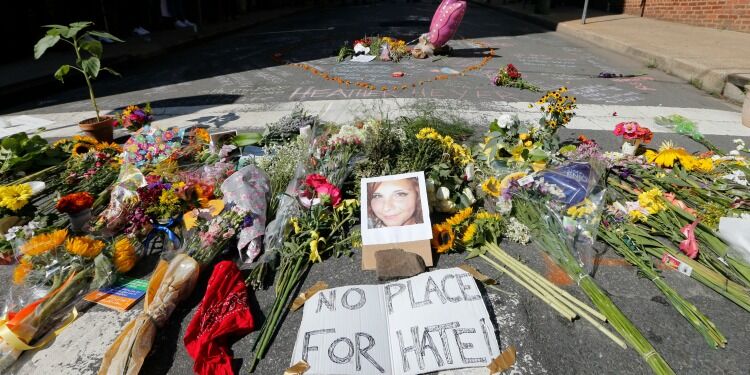