‘The threat of in-person violence has always been there,” said Leah Russin, vaccine advocate and frequent target of anti-vaccination activists. “But I think the reality of it has escalated.” She’s right to worry.

In recent months, “anti-vaxxer” agitation has jumped off your Facebook timeline and transformed into an aggressive and menacingly effective movement. Last December, vaccination opponents launched a campaign of intimidation and harassment against Nevada-based restaurants that planned to host vaccine awareness events, scuttling the program entirely. That same month, attempts to limit religious exemptions to vaccination laws in New Jersey failed when protesters laid siege to the state senate. In September, California Assemblywoman Sydney Kamlager-Dove had a cup of what appeared to be blood thrown at her by an anti-vaccine activist. Another irate demonstrator physically assaulted California state Sen. Richard Pan. Across the country, anti-vaccination groups are targeting physicians, advocates, and lawmakers in the effort to intimidate them into complacency.

These appalling (and occasionally criminal) displays of contempt for common standards of civic engagement are, to some observers, utterly inexplicable. How did these fringe activists come to adopt these guerrilla tactics? Vaccine advocates who spoke with NBC News speculated that this behavior was modeled after the Westboro Baptist church—a peripheral religious group that achieved infamy in the mid-2000s for picketing the funerals of U.S. soldiers and deploying grotesque anti-gay rhetoric. To the journalism advocacy organization Poynter, however, these maneuvers were too “similar to how anti-abortion protesters will stake out women’s health clinics” to be a coincidence.

It’s revealing that these primarily Democratic victims of the new normal must reach into the annals of history to find parallels that approximate their ordeals. It’s even more telling that the examples that leap to mind are only those committed by their political adversaries. The intellectual energy it must take to avoid acknowledging the obvious—that these tactics have recently been routinized by progressive activists—can’t be worth the effort.

There are few prominent Trump administration officials who would fail to recognize the familiar assaults and indignities anti-vaxxers have visited on vaccine advocates. For the sin of overturning a barely two-year-old Internet service provider regulation in 2017, Federal Communications Commission Chairman Ajit Pai’s home was picketed, his children harassed, his neighbors hounded, and his work targeted with bomb threats. Former Department of Homeland Security Sec. Kirstjen Nielsen was run out of a local restaurant by a screaming mob—a semi-spontaneous event that soon transformed into an around-the-clock siege of her home. These and other efforts to make sure Trump officials knew they were “not welcome anymore, anywhere,” as Rep. Maxine Waters averred, was not reserved only for White House officials. Conservatives of virtually every ideological stripe are intimately familiar with this kind of treatment.

“Your daddy is a horrible person,” screamed British protesters who picketed the home of conservative MP Jacob Rees-Mogg. “Maybe I do wanna go to jail,” one demonstrator confessed amid a blockade of Senate Majority Leader Mitch McConnell’s residence. “Just stab the motherf****r in the heart, please,” another fantasized. “Tucker Carlson. We will fight. We know where you sleep at night,” demonstrators chanted as they surrounded the Fox News Channel host’s home, breaking its oak door and forcing his terrified wife to lock herself in the pantry. The philosophical divergence among these targets—a conservative ideologue, an establishmentarian legislator, and a populist entertainer respectively—couldn’t be greater. What they share is opposition to the progressive program. That alone is why their enemies rationalized themselves into total political warfare against them, their associates, and their families.

These tactics are not even limited to public figures. In 2018, a New York University adjunct professor created and disseminated a database with the information posted to LinkedIn by over 1,500 Immigration and Customs Enforcement employees. “As ICE continues to ramp up its inhumane surveillance and detention efforts,” he wrote, “I believe it’s important to document what’s happening, and by whom, in any way we can.” Though veiled, his intention was clear, and his ideological allies got the message. ICE facilities were surrounded by protesters. One was attacked by a man throwing “incendiary objects.” ICE employees were targeted and harassed in their homes. As recently as September of last year, for the second time in as many weeks, ICE officials in Tacoma, Washington, made desperate appeals to the public. ICE  regional director Nathalie Asher warned demonstrators that their efforts to disrupt their activities risked “encouraging violence.” Her pleas have fallen on deaf ears.

This isn’t a new phenomenon. Political protesters have been busily erasing the boundaries between the private and professional for years predating the Trump administration. These reckless and counterproductive assaults on the civic compact deserve nothing but scorn from responsible Americans. Even a self-serving prudential calculation should have led those who are sympathetic to these political insurgents to condemn them, and not just for the sake of appearances. Nihilism knows no sense of propriety, so it was inevitable that these tactics would one day be turned against those who excused them as well-intentioned. That day, it seems, is today. 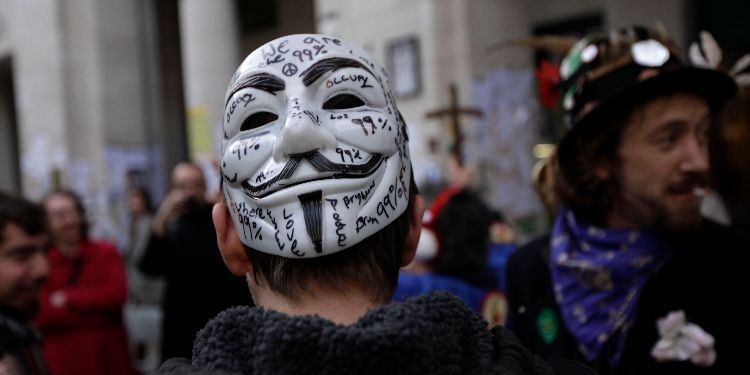