The impeachment inquiry into Donald Trump’s alleged efforts to pressure his Ukrainian counterpart into advancing Trump’s domestic political interests is not moving in a direction that makes Republicans happy.

Moreover, according to the New York Times, Vindman prepared documents for Trump at the request of former National Security Adviser John Bolton, which would have released inexplicably waylaid military aid Congress had authorized for Ukraine, but Trump refused to sign. Vindman’s testimony further isolates Trump, contradicts the statements of the president’s most favorable witness, and confirms the numerous contemporaneous accounts of the administration’s behavior. So, how have Trump’s defenders responded to this fateful development? By attacking the messenger, of course.

Shortly after news broke of Vindman’s testimony, former Justice Department official John Yoo joined Fox News Channel host Laura Ingraham for a segment in which both sought to defuse the explosive testimony by insinuating that the decorated veteran was a spy. “Here we have a U.S. national security official who is advising Ukraine, while working inside the White House, apparently against the president’s interest, and usually, they spoke in English,” Ingraham observed. Yoo agreed. “I find that astounding and, you know, some people might call that espionage,” he said.

In an appearance on CNN the following morning, Former Congressman Sean Duffy made the implication of these comments explicit. “It seems very clear that he is incredibly concerned about Ukrainian defense,” Duffy said of Vindman. “I don’t know about his concern [for] American policy, but his main mission was to make sure the Ukraine got those weapons.” When pressed repeatedly to say whether he believed that Vindman, who received the Purple Heart for wounds he sustained during a tour of duty in Iraq, could have been acting in defense of America’s best interests, Duffy declined to say.

To their credit, House Republicans didn’t repeat this line of attack, but only after a few test runs showed that it landed with a resounding thud. It’s hard to find a talking point this foolish stated publicly, much less repeatedly and by multiple sources, in the absence of some direction. The president wants to see his supporters fight for him, even if that fight takes place on entirely indefensible terrain. This is only the latest uncompelling argument the GOP has made in the president’s defense.

For weeks, Republicans argued against the methods by which Democrats have gone about impeaching the president, conveniently avoiding a defense of the president’s actions in the process. Republicans have claimed that Democrats have deposed witnesses behind closed doors and selectively leaked their statements to achieve maximum political benefit. Thus, Republicans claim, Democratic behavior has rendered the impeachment push invalid (even though a federal judge has already ruled that this impeachment process is entirely legal).

On Thursday, Nancy Pelosi approved a vote formalizing the impeachment inquiry and opening proceedings to public scrutiny. To this, White House Press Sec. Stephanie Grisham responded by claiming that the proceedings remain “completely and irreversibly illegitimate.” This, too, soon became Republican dogma. “You can’t fix this process at this point,” Rep. Liz Cheney insisted. “We will not legitimize the Schiff/Pelosi sham impeachment,” Minority Leader Kevin McCarthy averred. The GOP’s unwillingness to declare victory inadvertently exposes its triumph as potentially pyrrhic. It’s not at all clear that allowing the public to hear directly from the president’s shaken subordinates will yield a more favorable political climate for the president.

What Pelosi’s maneuver will do, though, is provide Republicans with an opportunity to castigate their Democratic colleagues on camera, where they might be able to satisfy the president’s desire to see the charges against him (and not just the process by which they are litigated) rebutted more forcefully. The problem for Trump is that such a rebuttal does not yet exist. Congressman Mo Brooks made a valiant attempt by contending that “every instance in which the United States government gives another country something” should be accompanied by “a quid pro quo.” Indeed, conditioning foreign aid on terms favorable to the United States is both common and critical. Conditioning that aid on terms favorable to the domestic political prospects of the president—the substance of the charge against Trump—is not. So far, with the exception of Sen. Rand Paul, Brooks has not recruited his fellow Republicans to this crusade.

What is the GOP’s end game here? Are we to believe that Soviet emigres are suspect by virtue of the accidents of their birth, altogether discounting the lives they’ve led in America? Must we assume that the many officials in Trump’s orbit who believed his actions represented a contravention of U.S. national security priorities are all “deep state” operatives—a list that now includes Amb. William Taylor and Lt. Col. Alexander Vindman, both of whom continue to serve in Trump’s administration at the president’s discretion? Does the list of saboteurs include John Bolton, a longstanding critic of the sprawling national-security bureaucracy, who also apparently objected to the president’s conduct? If Democrats are undermining the public trust by conducting closed-door hearings, isn’t it incumbent on the Republicans who could be privy to those sessions to, you know, show up? Is the remedy to Democrat-led institutional decay the storming of a secure information facility armed with compromising mobile devices and with no grander aim than getting on the evening’s cable news programs?

The GOP’s scattershot messaging strategy is an outgrowth of the White House’s failure to provide its allies with a credible defense of the president’s behavior. Trump’s defenders have improvised their way into a defensive crouch, lashing out in every direction with nihilistic disregard. There are, however, some indications that Republicans are embracing a more coherent defense of the president’s conduct by claiming, rightly, that none of the unscrupulous actions the president allegedly wanted Ukraine to take on his behalf actually occurred. It’s a line that is unlikely to satisfy Trump, but you go to war with the army you’ve got. 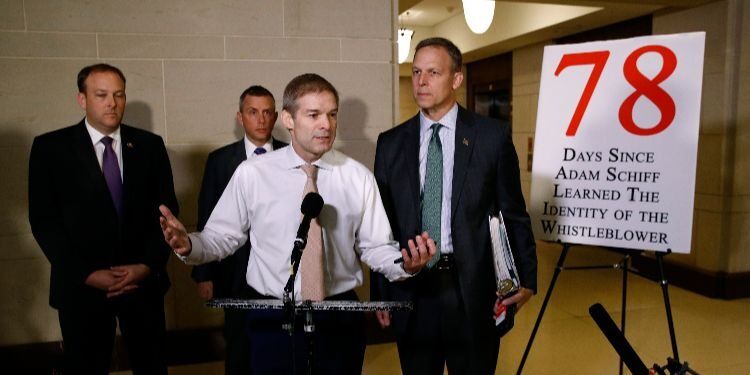