“Mitch McConnell liked to call himself Darth Vader in the Senate,” New York Times politics reporter Trip Gabriel observed. “Looks like Amy McGrath will run as Luke Skywalker.” This remark is an ominous portent. Former Democratic House of Representatives candidate Amy McGrath’s decision to take on the Senate majority leader next November has already triggered the instinctual impulse among the journalistic class to affix white and black hats to their subjects. If history is any guide, McGrath will enjoy media coverage disproportionate in scope and lacking in dispassion relative to her objective chances of winning at the polls.

“I am further left, I am more progressive, than anyone in the state of Kentucky,” McGrath unwisely said of herself at a Massachusetts fundraiser during her bid to represent Kentucky’s 6th Congressional district. Despite her admirable record as a Marine fighter pilot and her national profile, her opponent and the national GOP hung those words around her neck. She lost by three points in a district in which Republicans were favored by nine. That’s no small feat, but one that was illustrative of the Democratic Party’s institutional weaknesses. The race in Kentucky’s 6th was effectively nationalized, transforming it into a referendum on Donald Trump. But unlike in much of the country, this contrast helped the Republican incumbent generate tremendous rural turnout sufficient to overcome the political environment’s Democratic lean. Those conditions are unlikely to subside in 2020 when Trump is actually on the ballot.

If McGrath wasn’t a great fit for a district that voted for Trump by 15 points, it’s unlikely that she’ll be a better fit for a state that supported the president by 30. But you never know. Campaigns are wild animals, and almost anything can happen. McGrath is a strong fundraiser and her opponent is one of her party’s top targets, so it’s likely that the race for Senate in Kentucky will feel competitive even if it’s probably not. But McGrath’s objective chances for victory are unlikely to be any obstacle to the political and pop media, which have established a grand tradition of beatifying Democratic candidates for statewide office in red states.

Texans are intimately familiar with the circumstances that are likely to befall Kentucky. Texas State Senator Wendy Davis became an “overnight celebrity,” according to the New York Times, after her successful 2011 filibuster to block a bill that would have cut funding for state schools. The “petite, eloquent and seemingly fearless politician” suddenly had a national profile, but she wouldn’t truly become what the Washington Post described as a “hero” to Democrats until she tried the same trick to block a bill imposing ambulatory health standards on Texas abortion clinics. Davis was exalted as a harbinger of a revivified Democratic Party in the South. Even her shoes were hallowed, revered in national media profiles.

Davis translated her national media platform into a well-funded statewide campaign to succeed Rick Perry in the governor’s mansion and lost. But it wasn’t just any loss—it was the kind of loss that reverberates down the ticket, taking her fellow Democrats with her into defeat. “Davis was the kind of candidate who could at least move the needle for the bedraggled party,” the Texas Tribune’s Jay Root wrote for the Post. “She moved the needle, all right—backward.”

If there was a lesson here, Democrats didn’t learn it. Davis’s dubious celebrity was seamlessly transferred to Beto O’Rourke in his quest to take down Sen. Ted Cruz. “Not since the press corps fell in love with Barack Obama in the 2008 presidential campaign has such a sirocco of worshipful candidate profiles and commentaries appeared in the national press,” wrote Politico’s media watcher Jack Shafer:

“Is Beto O’Rourke the Left’s Obama-like Answer to Trump in 2020?” asked Vanity Fair. “Beto O’Rourke Could Be the Democrat Texas Has Been Waiting For,” offered BuzzFeed. Still more positive Beto coverage sprinkled the pages of Yahoo News, Time, GQ, Rolling Stone, the Guardian, the New York Times, Politico and Esquire as they worked off the same template. The Washington Post indulged Betomania with a feature, another feature, a column and the sort of ancillary coverage it ordinarily gives the Washington Redskins.

O’Rourke was treated like a celebrity, and celebrities welcomed him as one of their own. It was only after he lost to the incumbent senator that “media fell out of love” with the former Texas congressman. Suddenly, the features romanticizing O’Rourke’s quirky skateboarding hobby and his love of punk-rock music transitioned into unflattering examinations of his relationship history, failed commercial ventures, and “male privilege.” The failure of O’Rourke 2020 to launch suggests the media frenzy that typified his 2018 Senate bid was more an outgrowth of newsroom antipathy toward Ted Cruz than appreciation for his opponent’s talents.

Even some Kentucky residents will remember their own manufactured campaign to immortalize a promising Democratic aspirant. They went through this the last time Mitch McConnell was up for reelection. Secretary of State Alison Lundergan Grimes was the recipient of copious favorable media attention both in and outside her state. “She has a booming voice, a litigator’s gaze and a lust for a fight,” the New York Times gushed. A list of Grimes’s donors reads like a who’s who in Hollywood, and she was feted in coastal enclaves as a “good ol’ girl” and “a straight shooter”—albeit one who couldn’t say whether she voted for the Democratic president. The 2014 Senate race in Kentucky seemed competitive right up until the minute it wasn’t, and Grimes lost by a decisive 16 points.

To some extent, the level of celebrity treatment a red state Democratic candidate receives is proportional to the rate at which Democrats salivate over flipping that state. Georgia, too, is forever on the cusp of turning blue again, and so it was that 2018 Democratic gubernatorial candidate Stacey Abrams stepped into the limelight. She found herself on the cover of magazines and aboard celebrity-packed busses, and her boosters ignored her ominous habit of insulting the state’s conservative electorate. But if Abrams benefited from an overly cordial reception in the press, it wasn’t much more than former Georgia Senate candidate Michelle Nunn enjoyed. Texas hopefuls Bill White and Julián Castro, too, received the glossy treatment.

There are, however, exceptions which prove the rule. Arizona Sen. Kyrsten Sinema is among them. She’s young, female, openly bisexual, and last year became the first Democrat elected to represent the Grand Canyon state in the Senate since 1988. Yet Sinema has not been the subject of fawning adoration in the press, and it’s hard not to conclude that this is largely attributable to her moderate campaign and genuinely centrist voting record. Progressives cannot claim her as their own, so they do not claim her at all.

Will McGrath become the next great hope in the media? You can already hear the image-making machine whirring to life in coastal newsrooms. Make no mistake: McGrath has a shot, even if it is a long one. And if history is any guide, the press will do its best to drag her across the finish line. 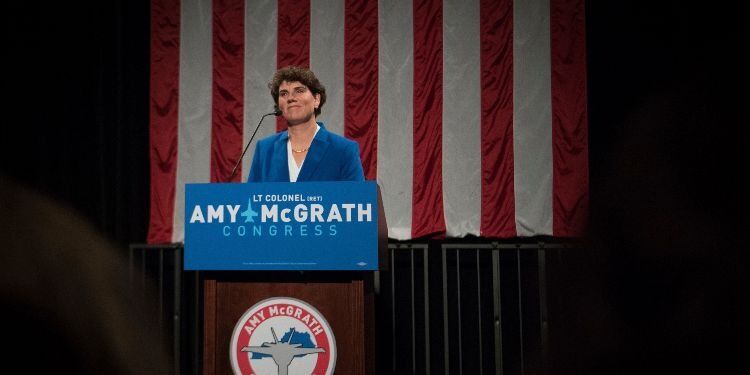