It is said that you make your own luck, and Republicans have made for themselves a lot of awful luck in 2016. The GOP has not been just unfortunate; its members have often failed to take advantage of opportunities. The latest missed chance for redemption in the era of Trump comes from two very unlikely sources: President Barack Obama and Secretary of State Hillary Clinton. Both Democrats opted to absolve traditional Republicans for their roles in Donald Trump’ ascension. That’s causing some tension within the Democratic camp, but Republicans can’t seem to be bothered to notice. They are busily rejecting the lifeline curiously thrown their way by Democrats.

The Republican nominee for president is toxic. According to some surveys, he is viewed favorably by approximately one-third of likely voters. He often under-polls Hillary Clinton on the matter of who is more trustworthy—a remarkable feat. Trump is underperforming both Mitt Romney and John McCain among minority voters, women, and young people—precisely the members of the “coalition of the ascendant,” who may still cement the foundations of a generation of majority Democratic governance. It would be political malpractice for Democrats to fail to use their opponent’s radioactivity to catapult their down-ballot nominees into federal office. Yet, the president and his chosen successor are not playing along.

“What we heard in Cleveland last week wasn’t particularly Republican,” said Barack Obama in his address to the Democratic National Convention, “and it sure wasn’t conservative.”

“What we heard was a deeply pessimistic vision of a country where we turn against each other, and turn away from the rest of the world,” the president added. The inference is clearly that Republicanism and conservatism are distinct from, if not antithetical to, the malleable and amorphous policy vision promoted by Trump.

Clinton echoed this sentiment in a speech last week defining and condemning the white nationalist “alt-right” movement, which has been so supportive of Trump’s candidacy. “This is not conservatism as we have known it,” Clinton said of the “extremist fringe of the conservative right” endorsed by the blog Breitbart News operated by Trump campaign CEO Steve Bannon. “This is not Republicanism as we have known it.”

That passage is fascinating. While Clinton’s attack on the “extremist fringe of the conservative right” was part of the prepared text, Clinton’s quip about Trumpism representing a departure from the GOP, as she has known it was an ad-lib. It was an honest assessment conveyed extemporaneously. That’s no small detail, particularly considering the tension this line of campaign rhetoric is causing among Democrats. While Clinton and Obama are mobilizing non-Democratic voters by framing the GOP nominee’s program as an existential threat to democracy that demands unparalleled unity of purpose among all Americans, the Democratic Party’s committees are doing their best to link the GOP’s congressional candidates to Trump.

“I’d sure like them to tie the House and Senate Republican to Trump more than they do,” said former communications advisor for Senator Harry Reid, Jim Manley, of both Obama and Clinton. In an interview with Bloomberg’s Sahil Kapur, Manley and other Democrats expressed dismay over the contradictory message expressed by Democrats. “[T]hey don’t want us to tie Trump to other Republicans because they think it makes him look normal,” wrote former DNC Communications Director Luis Miranda in an internal email released by WikiLeaks. “That’s a problem,” Miranda added. “We would basically have to throw out our entire frame that the GOP made Trump through years of divisive and ugly politics.”

Democratic committees are already attacking Republicans on the ballot in November for their Trump endorsements or their refusal to distance themselves from the nominee. Republicans, meanwhile, are playing right into their hands.

According to thinking within the Republican circles, their party’s incumbents are stuck with Trump. If the party walks away from him now, it might demoralize their base voters and turn off independents. If the presidential nominee is down by more than seven points nationally in November, the GOP’s congressional majorities—both of them—will likely be lost. A narrow loss, however, might be even worse. A Clinton victory of between one and three points would let Trump claim that he was stabbed in the back by recalcitrant Republicans, tearing the party in two. For the GOP, a Trump defeat of about four-to-six points is the sweet spot. It is for that reason that the party’s nominees must at least make a perfunctory stand behind their nominee in a display of unity.

This thinking presumes that the phenomenon of ticket splitting is dead, but it might be making a comeback this year. It also ignores the fact that there are incumbents who can do everything right in a year in which their party is poised to suffer—notably, Republicans like Senators Pat Toomey and Kelly Ayotte—who seem unable to overcome the environment. By refusing to take the lifeline offered to them by Obama and Clinton, they have tethered themselves to an anchor.

Conservative Republicans who oppose Trump and regard his ill-defined vision as a deviation should be forcing Democrats to confront Obama and Clinton’s decision to divorce them from the GOP nominee. That’s not happening. The GOP appears resigned to the coming loss, the scale of which will only become apparent as the electorate tunes into the race and Democrats being to link the GOP’s candidates to Trump. By then, however, no amount of lifelines will save the Republican Party. 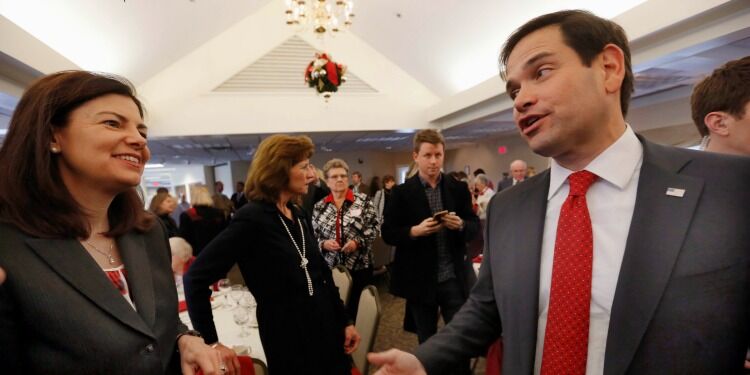