It took fewer than 12 hours for Donald Trump to effectively retract his condemnation of the white nationalists behind the weekend bloodshed in Charlottesville, Virginia.

Amid intense criticism over his initial equivocation and refusal to name the Hitlerite goons who had instigated the violence, the president corrected course Monday afternoon. At a White House news conference, he railed against the “KKK, neo-Nazis, white supremacists, and other hate groups that are repugnant to everything we hold dear as Americans.” It was a scripted moment, and it came two days later than it should have. Still, you could almost hear the sighs of relief from Trump’s conservative-media defenders.

The president reversed himself – again – in classic Trumpian fashion. Late Monday evening, he tweeted: “Made additional remarks on Charlottesville and realize once again that the #Fake News Media will never be satisfied… truly bad people!” Which made the afternoon statement look like a begrudging concession to an ungrateful press corps rather than a genuine expression. As if to validate the impression, Trump retweeted an alt-right figure a few hours later.

Set aside the inane whataboutism of the tweet itself: “39 shootings in Chicago this weekend, 9 deaths. No national media outrage. Why is that?” Chicago’s crime epidemic deserves media coverage, to be sure, but so does a white-nationalist rally that ends with a motor-vehicle rampage, the death of one innocent and the maiming of at least 19 others.

More notable was the author of the tweet, Jack Posobiec. The activist and “reporter” is a creature of the alt-right fever swamps. He wouldn’t deserve a minute’s attention but for the fact that he has now been thrust into global prominence by the leader of the Free World.

Posobiec has described Richard Spencer, the organizer of the Charlottesville night of the long torches, as “indispensable.” He has peddled the conspiracy theory that Democrats ran a pedophilia ring out of a Washington pizza parlor. Most bizarre, by my lights, is his claim that globalist forces have drugged French President Emmanuel Macron since his earliest days and are now using him as a puppet.

“It may be a way that they found this guy [Macron] very, very young,” he told the conspiracy network Infowars in May, “and they were using that to essentially turn him into a puppet, turn him into a marionette, and now they’re plying him with drugs, keeping him drugged up and getting him to do whatever they want.”

The expression that comes to mind is double discourse. The president offers one set of messages when he is scripted and facing media pressure while telegraphing something else–sometimes the diametric opposite–when addressing his nutsy online base. As for his defenders in the conservative media, the ones who are convinced that a responsible, presidential Trump is just around the corner: He will always disappoint you. And with each disappointment comes a fresh dose of humiliation. 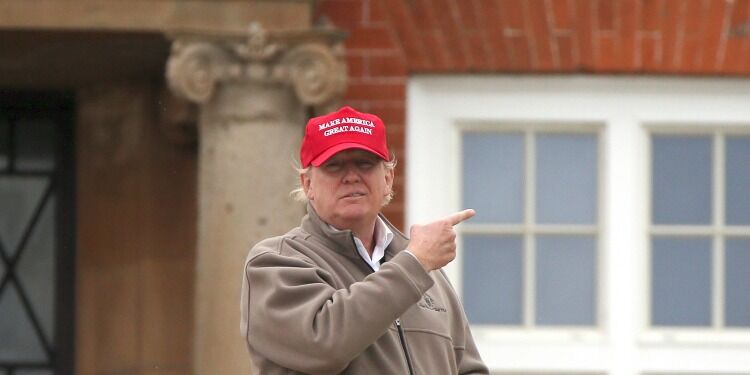