With seven days to go until a general election called in expectation of a landslide Conservative victory, Theresa May is suddenly facing the prospect of an extraordinary reversal. Two weeks ago, polls consistently put her 20 points ahead of the opposition Labour Party, but if a week is a long time in politics, the past fortnight has felt like an age.

Prime Minister May’s ratings have plunged, while support for Labour has steadily climbed. Bold reforms to funding seniors’ care–shifting the financial onus onto the individual–have prompted a backlash from over-65s, hitherto the most reliable Tory electoral bloc. Mrs. May’s campaign slogan, ‘Strong and stable’, has not survived the Manchester terrorist attack, which has left the country insecure and introspective. The effect has been akin to that of the Madrid train bombings on the 2004 Spanish election; 53 percent of voters agree with Labour leader Jeremy Corbyn that UK military actions overseas are responsible for terror attacks.

In short, Britain is having a jolly old wobble. What makes it all the more remarkable is the nature of Mrs. May’s opposition: Jeremy Corbyn is by common consent the most left-wing leader in the history of the Labour Party, elected by new grassroots members over the objections of his parliamentary caucus. He positioned himself as the repudiation of New Labour, Tony Blair’s moderate makeover that delivered Labour three election victories after two decades in opposition.

Corbyn is a sentimental Marxist, more mawkish than materialist, but his nostalgia for pre-Thatcher Britain is not why he was supposed to be electoral poison. Corbyn has a lengthy, well-documented record of extreme positions and associations; in particular, his active sympathy for the Irish Republican Army and his predilection for making common cause with anti-Semites.

The Islington North MP voted against the 1985 Anglo-Irish Agreement as an impediment to a United Ireland. Corbyn was more than just a fashionable leftist, though. He was a fellow-traveler of the IRA at the height of its terrorist campaign in Northern Ireland and on mainland Britain. In 1994, an investigation by the Daily Telegraph found that Corbyn shared a platform at an Irish republican rally with Angelo Fusco, then on the run after killing a British SAS officer. He lobbied for more prison privileges for Hugh Doherty, an IRA terrorist serving 11 life sentences for murder; a petition on the matter championed by Corbyn described republican terrorists as “political prisoners.”

After the IRA’s attempted assassination of Margaret Thatcher in 1984, Corbyn invited republican figurehead Gerry Adams and two convicted terrorists to the House of Commons. Adams was identified as a member of the IRA’s army council by the Irish government. London Labour Briefing, a far-left journal where Corbyn was general secretary of the editorial board, editorialized after the Brighton bombing: “Let our ‘Iron Lady’ know this: those who live by the sword shall die by it. If she wants violence, then violence she will certainly get.” Two years later, Corbyn was arrested at a “solidarity” protest outside the trial of Patrick Magee, the man convicted of the Brighton attack.

His solidarity extends beyond the men in balaclavas to other strains of extremism. He invited ‘friends’ from Hamas and Hezbollah to Parliament and even welcomed Raed Salah, promoter of the blood libel, to tea on the terrace of the House of Commons. As recently as 2013, Corbyn was still attending anti-Israel events organized by Paul Eisen, a self-confessed Holocaust denier. And in 2014, the Sunday Times reported that he laid a wreath in honor of one of the architects of the Munich massacre. Corbyn continues to defend the $26,000 he took from Press TV for five guest host stints on the Iranian propaganda outlet.

His leadership of Labour has witnessed an anti-Semitism crisis in the party, with a series of members under investigation and an MP temporarily suspended. Labour has refused to expel its former Mayor of London Ken Livingstone despite repeated outbursts linking Zionism and Nazism. Labour, once seen as an ally and a friend of Israel, is now polling at 13 percent amongst British Jews.

Those observing Britain’s election from afar might gaze in disbelief at a new poll predicting Labour will actually gain seats next week, and even deprive the Tories of their parliamentary majority. They should rest assured much of the UK’s political class and commentariat is equally mesmerized. YouGov’s methodology is controversial, drawing on demographic commonalities across the electorate, but it correctly predicted the outcome of the Brexit referendum. It also reflects a series of polls in the last 14 days that have seen Tory support tumble and Labour, against all expectations, pick up voters.

Whatever the merits of these projections, the fact that a man of Jeremy Corbyn’s record and character is now a serious contender for Prime Minister should deeply trouble Great Britain and her friends around the world. Not because he is a high-taxer or profligate spender; public policy objectives change with governments and moods. Rather, Corbyn confronts Britons with a test: What kind of country is the UK?

Just a few years ago, consorting with the IRA would have immediately ended the career of any prominent politician. Even on the Left, there was widespread revulsion at the barbarism of an organization which tortured and murdered civilians, Catholic and Protestant, as well as British soldiers. Even The Guardian, hardly an unbending foe of Irish republicanism, has previously charged Corbyn with a “lack of wider political and moral judgement” and characterized him as a “fool” and a “childish sideshow.”

None of this seems to be cutting through with the electorate. In part, this is because the IRA is slowly fading from the national consciousness and millennials have scarcely even heard of it. Also in part, Corbyn’s flacks have been effective at dismissing every fresh revelation with a Trumpian cry of “fake news” and relying on social media to push their message. There is, however, a third, arguably more disturbing phenomenon at work. After seven years of a Conservative government pursuing austerity to rebalance public finances–and with warnings of economic anguish after Brexit–voters have developed Grown-up Fatigue. They no longer yearn for the unvarnished truth about spending and public debt; they’d like to be cut some slack, have the government pick up the tab for their children’s tuition, and live a little. This political immaturity, a reversion to juvenile dependency on the state, robs the 2017 election of the moral dimension that shaped the 2010 and 2015 polls.

The Tories contend that Jeremy Corbyn is a security risk, but he is a moral hazard, too. His cheerleading for Britain’s enemies is one thing; the British state is a big boy and can take care of itself. His connections with and tolerance for anti-Semites is an outrage of another order. The threat of Corbyn and who and what he would bring with him to Downing Street is concentrating the minds of many Jews in the UK. There is sincere and acute anxiety and given his catalog of prejudices, concealed behind the gentle countenance of a bearded grandfather, that is understandable.

“[T]he way a culture treats its Jews is the best indicator of its humanity or lack of it,” Jonathan Sacks maintains, and Britain would be disregarding its Jews in a most callous fashion if it ignored their fears and put this man in power. That is the Corbyn test voters will sit on June 8: Do they want a prime minister who counts terrorists as friends and Jews as enemies? 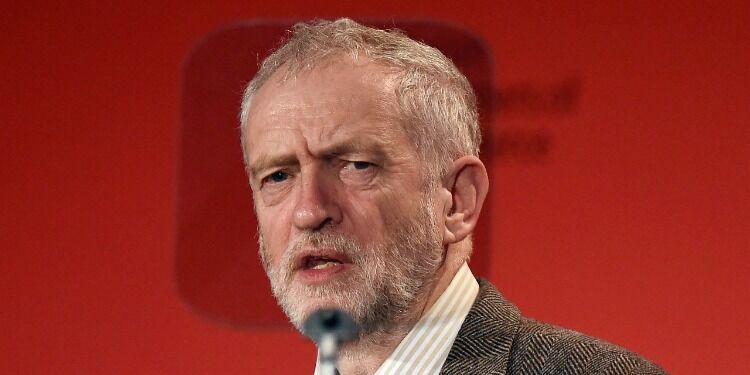