It was a cliffhanger on Wednesday night in the Knesset, with journalists and politicians jostling for position, a scoop, the edge. More than 30 parties are fielding candidates in the next election, but they form “technical” clusters to ensure that smaller interests meet the 3.25 percent balloting threshold necessary to win seats.

All the bartering between competing factions entering forced, temporary marriages for the March 2 election—the third within a year—had to be finalized and candidate lists submitted by 10 pm on Wednesday.

Peak drama was within the volatile camp that identifies as “religious Zionist.” It’s a loose confederation of interests, bringing together what are, for the most part, modern Orthodox Jews, who are hardline on settlements in Judea and Samaria. Unlike most in the Haredi ultra-Orthodox camp, religious Zionists work, serve in the army, have slightly smaller families, and comprise the majority of the 500,000 or so Israelis living on disputed land.

They wear knitted kippot (as opposed to the austere black favored by the ultra-orthodox) and sport more modern dress, allowing color and style for men and women.

The Haredi ultra-Orthodox, by contrast, don’t engage in military and territorial issues. They tend to focus on their community needs, meaning funding for full-time adult Torah study (instead of work), health care for their very large families, and all manner of state lifestyle subsidies. Religious Zionists are dedicated to repatriating the West Bank, which they refer to by its historical name: Judea and Samaria.

In the past, kibbutzim (the foundation of the pre- and early-state years) comprised the foundational force of Israel. They tended to be secular and socialist, and they functioned as feed farms for elite institutions, providing a steady supply of IDF generals, fighter pilots, political leaders, and union officials. These days, kibbutzim are on life support or reinventing are themselves with a private sector focus. The religious nationalists have slowly, quietly, become the backbone of the IDF. Seventy percent of officers in the IDF are religious Zionists. They are disproportionately represented in combat units. As such, there has been a very quiet, steady, transfer of power and influence.

In previous generations, Israeli youth competed for a spot in top combat units. These days, most favor intelligence and technology-oriented positions in the military, which gives them a leg up when they re-enter civilian life. Combat has become the preserve of the super-committed religious Zionists. And they are, by all accounts, exceptional soldiers.

Their political leadership is more haphazard; a hodgepodge of moderates, extremist rabbis (with a propensity for saying extreme things), and, quite a few strong, feminist women. Led by Naftali Bennett and Ayelet Shaked for the last few years, they have tried to rebrand their “movement” as a visionary one—neither religious nor secular—that brings together all Israelis who ascribe to a right-wing perspective.

It’s been a roller coaster for Bennett and Shaked, who were briefly shut out of political life when they failed to make the election threshold to enter the Knesset in the May 2019 election. They rebounded in the September 2019 election, and they hope to improve their seat count in March.

Recently, their coalition has been on an upswing. Bennett has served for several months now as Minister of Defense, a critical plum extracted from Prime Minister Benjamin Netanyahu. That has allowed Bennett to burnish his credentials, and that burnishing yielded him a bump in the polls.

So, in the final hours of brass-knuckled negotiations on Wednesday night, it came down to this: Netanyahu was pressuring Bennett and Shaked to include all the smaller right-wing parties under their inclusive umbrella, including the Kahanist “Otzma Yehudi” (Jewish Power) faction, led by Itamar Ben Gvir. In his living room, Ben Gvir hangs a portrait of Baruch Goldstein, who attacked Muslim worshippers in Hebron on February 25, 1994, and murdered 29 at prayer and injuring another 130. Reportedly, Ben Gvir has a second Goldstein portrait in his bedroom, which, if true, is more than beyond creepy.

Bibi needs a “united” right—one that is beholden to him and who will, therefore, as a bloc, control the Knesset and support his quest for immunity for the numerous criminal charges he faces.

Bennett seized on the Ben Gvir living room “picture” as his red line for refusing to accede to Netanyahu’s attempts to persuade him to bring the avowed Kahanist on board.

But Bennett has also embraced extremists, now and in the past, including Rafi Peretz, the former chief rabbi of the IDF who has repeatedly expressed contempt for homosexuals and expressed support for “conversion therapy.” He currently serves as the minister of Education.

Just a month ago, Peretz (who heads one of the religious-right factions) made an “agreement” with Ben Gvir, which he has vowed to honor. That agreement included a promise to add Ben Gvir to his list of candidates in the coming election. “My word is my word,” intoned Peretz, with gravitas and frequency, to the press and elsewhere. Dropping in on one of the Saturday evening political talk shows last weekend, Ben Gvir reminded viewers of Peretz’s pledge and affirmed that he had total confidence in his integrity.

And then, Wednesday night happened. According to reports from journalists stalking Knesset halls, Ben Gvir and Peretz were behind closed doors, but the yelling was audible outside. It seems that was the moment when Rabbi Peretz advised his former sidekick that he was kicking him to the curb. At 9:50 pm, with ten minutes left to sort out and file his final list, Ben Gvir was photographed looking very, very glum.

Chances are that Ben Gvir and his racist cohort will not meet the Knesset threshold. Still, the fact that they were being courted at all by any party should cause the entire Israeli electorate—even those who are hardline on Judea and Samara—serious concern. 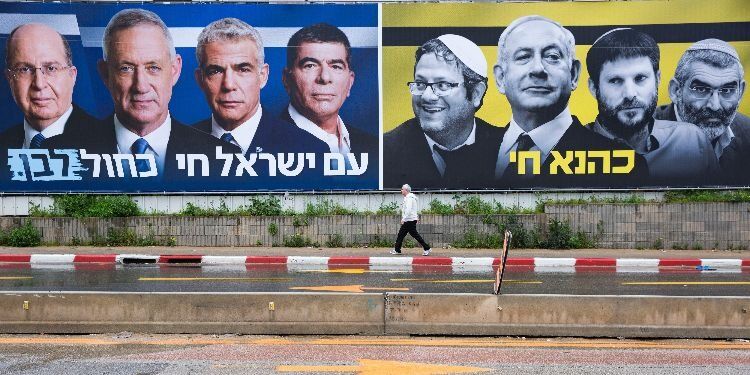