Rabbi Chaim Kanievsky, the 93-year old head of the hundreds of thousands of non-hasidic, Haredi Jews in Israel, has created quite a stir in recent days.

He leads a cohort of followers who are, by and large, descended from Lithuanian Jews and considered to be the most ascetic and stern in terms of lifestyle and rigid religious practice. So, when he was asked a week ago Sunday whether schools and yeshivot should abide by the emergency directives of the government of Israel–among them that all schools be closed–he is reported to have responded that to abandon Torah study is more harmful than the coronavirus.

There are many variations on the Rabbi’s precise words, but the essence is not disputed: That Torah learning must continue, no matter the perceived threat or danger. Because of his “ruling,” many educational institutions stayed open.

This means that hundreds of boys, girls, young men and women, have been jammed into overcrowded schools and study halls, breaching the “social distancing” emergency practices being adhered to by the general population.

Large weddings were celebrated in the Haredi community in recent days, with hundreds of guests in very close contact, in flagrant violation of every requirement of our “new normal” partial lockdown existence.

And that is because Haredi men and women, girls and boys, overwhelmingly defer to their Rabbis, and choose to believe that their belief in God and devotion to Torah study and way of life will spare them.

Meanwhile, a darker drama was unfolding, behind closed doors. Last Monday, senior officials from law enforcement and the official religious authorities paid a house call on Rabbi Kanievsky at his home in B’nei Brak, a Haredi town of 200,000 people just east of Tel Aviv. Shortly, after, a “compromise” was announced.

The rebbe apparently agreed that yeshivot and schools may remain open but could study in groups no larger than ten persons; a minyan.

To suggest that this preferred treatment has rankled the broader population doesn’t begin to describe the anger. We are all on an equal footing in this “war,” as Benjamin Netanyahu characterized the current situation. That ultra-orthodox schools remain open, is unfair, unsustainable, unjustifiable, and unethical.

Following several days of this conduct, as well as significant hard evidence of an early and rampant community contagion rate within the ultra-orthodox communities–both in Israel and New York–measures in Israel were stepped up on Thursday night. The prime minister and senior government officials warned that anyone not following the emergency directives would be fined and possibly jailed for up to six months.

It remains to be seen if the Haredim will accept the social responsibility that constrains us all or if they will bait the state and continue to defy emergency measures.

Should their defiance of social distancing and other assorted lockdown measures be breached, the contagion rate in their communities will likely skyrocket.

On Wednesday, interestingly, police showed up at a Tel Aviv Haredi school with more than 200 students present and shut it down immediately. But that can be done in Tel Aviv–a highly secular bubble without much concern for a widespread riot or backlash. Jerusalem, Bet Shemesh, Bnei Brak, Beitar Illit, and other Haredi towns would not be quite as obedient. The Tel Aviv move was a shot across the bow; a warning signal that if things don’t change, the state may well be forced to take widespread action.

And it increased the pressure on minister of health, Yakov Litzman, who is also a member of the Gerer Hasidic sect, not known for its passionate Zionism. Until then, he had been conspicuously silent and invisible. On Thursday evening, following Bibi’s televised remarks, Litzman stepped up to the mic to express his support for the extraordinary government controls.

It was as clarion as a call gets to his fellow Haredim to fall in line or, one surmises, face severe repercussions.

Furthermore, in light of the Sephardic chief rabbi’s ruling on Wednesday that all should leave their cell phones turned on during Shabbat in the event that life-saving information is broadcast by SMS, Litzman was really forced to get with the program and use his influence to bring the Haredim along with him.

All Israelis are being urged to remain at home and venture outside only as necessary: to procure food and medicine and for one short walk each day. Whenever possible, public health is urging people to have supplies delivered. Gyms, pools, tennis courts, the seaside, playgrounds; all are shut down.

There is limited public transport and, each day, more and more people are gloved and masked. Social distancing, among this usually feisty population with pretty much zero concept of “personal space,” is the norm. Traffic is impossibly light. The streets are quiet.

Construction is one of the few types of work carrying on. Non-essential businesses are closed and where possible people are working remotely, or not at all. In the last few days, applications for unemployment benefits have skyrocketed. Internet service is becoming a little spotty at times, reflecting the surge in daytime demand as universities, schools, and offices do their best to flip to online learning and operations.

There are, of course, lapses in community conduct, but they are surprisingly anomalous. Except for the Haredi communities, where life, until now, has more or less carried on, as if a global pandemic hasn’t shut down borders and movement of people and goods in a manner never before experienced, in peace or in war.

May that change, immediately. 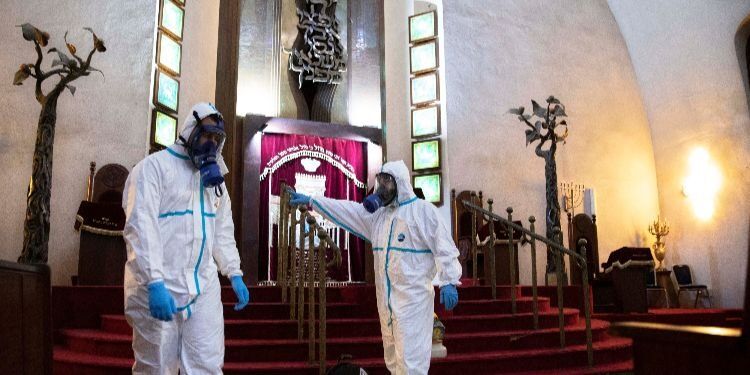